COMPRES, the Consortium for Materials Properties Research in Earth Sciences announces the speaker for its 2021 Distinguished Lecture series in the field of Mineral Physics. The talks feature topics that emphasize the exciting high-pressure geoscience research being conducted within the COMPRES community and its significance for understanding fundamental Earth and planetary processes.

The primary target audience for these lectures is undergraduates in departments of geology and related sciences at non-PhD granting institutions, but requests from all academic institutions in the U.S. are welcome.

We are pleased to announce that the COMPRES Distinguished Lecturer for 2021 is Dr. Jin Zhang of The University of New Mexico. The lecture titles, abstracts and bio are below. We invite you to request a virtual lecture from the COMPRES lecturer during the year.

The Lecture Program is designed to run thoughout the calendar year of 2021. Lecturer requests are given priority by date/time received. In making your request please include:

If your institution is interested in requesting a virtual lecture, please send your request to Carl Agee, President of COMPRES [agee@unm.edu] with a copy to Beth Ha [beth3ha@unm.edu].

We hope that your Department will be interested in hosting one of these mineral physics lectures in this academic year.
COMPRES is supported by the National Science Foundation Division of Earth Sciences. 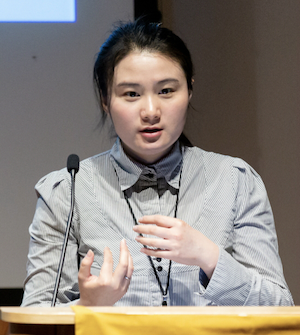 Jin Zhang received her B.S. degree from Nanjing University in 2008 and Ph.D. degree in Geology from the University of Illinois at Urbana-Champaign in 2014. After a short postdoc at University of Illinois, she became the COMPRES Chief Technology Officer stationed at the Advanced Photon Source of Argonne National Laboratory. Since July of 2016, she joined University of New Mexico, and held a joint appointment as both the assistant professor at the Department of Earth and Planetary Sciences as well as a senior research scientist at the Institute of Meteoritics. She recently received the Faculty Early Career Development (CAREER) Award (2019–2024) from the National Science Foundation. Her research interest primarily focuses on the physical properties, such as elastic anisotropy, phase transformations of the Earth and planetary materials, and exploring the linkage between the laboratory measurements with various geophysical and geochemical observations. She is also interested in phase equilibrium studies at high pressure-temperature conditions. Her specialty is high-pressure diamond-anvil cell and laser spectroscopy, but also employs multi-anvil presses and micro-analytical techniques for her research.

On the Earth, plate tectonics is primarily driven by dense lithospheric slabs subducting into the mantle. The crustal slabs, made of the dense eclogite metamorphosed from the Mid-Ocean Ridge Basalt, provide one of the most important driving forces for slab subduction, and those are also one of the major chemical heterogeneities in the Earth’s interior. Locating these heterogeneities by comparing the experimentally determined seismic properties of eclogite with ambient mantle helps us to understand the Earth’s chemical evolution over geological time. I will present some of our recent experimental results on eclogite to reveal its seismic visibility in the Earth’s upper mantle.  In addition, compared with the extremely active Earth, Mars lacks ongoing tectonic activities such as volcanism, marsquakes with large magnitude (e.g. M>4.0) and mountain building process. We hypothesize that the mantle convection inside Mars can be hindered if the density contrast between Martian crustal slabs and the ambient Martian mantle is sufficiently different from Earth. I will present high pressure-temperature phase equilibrium experiments and calculations of an eclogite metamorphosed from a near-primitive Martian basalt. Our results indicate the crustal slab is less dense than the ambient Martian mantle down to the depth of ~630 km. Sustained subduction on Mars is difficult if the Martian crust is represented by the Al-Ca poor shergottic basalt, our result may also explain the stability of some high volcano edifices (e.g. the Olympus Mons) on Mars.

(2) Visiting the interface between the upper mantle and transition zone: what does elasticity tell us?

The experimentally determined elastic properties of mantle minerals at elevated pressure and temperature conditions provides a powerful means for us to understand the chemical and physical processes in the Earth’s interior. In particular, the elasticity change caused by various mantle phase transformations are commonly used to explain the observed seismic interfaces between the different layers in deep Earth to the first order. In this talk, I am going to focus on olivine and its high‐pressure polymorphs, and then link the experimental predictions to the seismic observations near the 410-km discontinuity, which is the interface between the upper mantle and transition zone. These studies can bring in additional insights to the deformation mechanisms as well as petrological composition anomalies in the deep Earth interior.