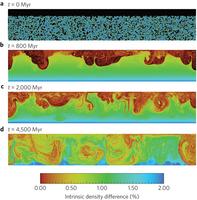 The mantle comprises nearly three-quarters of Earth’s volume and through convection connects the deep interior with the lithosphere and atmosphere. The composition of the mantle determines volcanic emissions, which are intimately linked to evolution of the primitive atmosphere. Fundamental questions remain on how and when the proto-Earth mantle became oxidized, and whether redox state is homogeneous or developed large-scale structures. Here we present experiments in which we subjected two synthetic samples of nearly identical composition that are representative of the lower mantle (enstatite chondrite), but synthesized under different oxygen fugacities, to pressures and temperatures up to 90 ... read more

Modern high-pressure experimental techniques have enabled us to achieve the pressure and temperature at the center of Earth (about 360 GPa and 6000 K) in laboratories. However, studies of rheological properties of minerals under controlled strain rate (creep experiments) have been limited to the pressure equivalent to that in Earth's transition zone, a depth only about one-tenth of Earth's radius. Determinations of rheological laws that govern the flows and viscosities of minerals in Earth's deep mantle have been far beyond our reach. In the absence of such critical data, the nature of mantle dynamics—such as whether the convection involves the entire lower mantle, yielding a chemically homogeneous deep mantle—remains controversial.... read more 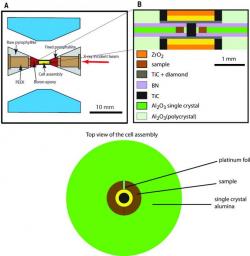 Rheological properties of the lower mantle have strong influence on the dynamics and evolution of Earth. By using the improved methods of quantitative deformation experiments at high pressures and temperatures, we deformed a mixture of bridgmanite and magnesiowüstite under the shallow lower mantle conditions. We conducted experiments up to about 100% strain at a strain rate of about 3 × 10−5 second−1. We found that bridgmanite is substantially stronger than magnesiowüstite and that magnesiowüstite largely accommodates the strain. Our results suggest that strain weakening and resultant shear localization likely occur in the lower mantle. This would explain the preservation of long-lived geochemical reservoirs and... read more

Geochemistry: Hydrogen and oxygen in the deep Earth

News and Views by Takehiko Yagi on the paper "FeO2 and FeOOH under deep lower-mantle conditions and Earth’s oxygen–hydrogen cycles" by Hu et al.

Hydrogen greatly affects the properties of many materials. It is thought that most of the hydrogen in modern Earth is in water molecules, many of which are found in water-bearing minerals. It is therefore crucial to understand the stability and circulation of such hydrous minerals in Earth's interior, and this need has led to numerous studies of hydrous minerals under high-pressure and high-temperature conditions. In this issue, Hu et al.1 (page 241) cast fresh light on the hydrogen-... read more 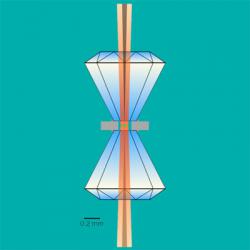 Developing a Picture of the Earth's Mantle

Deep inside the earth, seismic observations reveal that three distinct structures make up the boundary between the earth's metallic core and overlying silicate mantle at a depth of about 2,900 kilometers—an area whose composition is key to understanding the evolution and dynamics of our planet. These structures include remnants of subducted plates that originated near the earth's surface, ultralow-velocity zones believed to be enriched in iron, and large dense provinces of unknown composition and mineralogy. A team led by Caltech's Jennifer Jackson, professor of mineral physics has new evidence for the origin of these features that occur at the core-mantle boundary.

In addition to the pressure-volume-temperature diffraction... read more 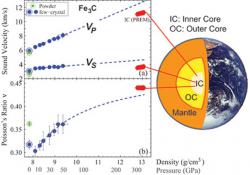 Is Carbon Responsible for the Anisotropy in the Earth’s Inner Core?

L. Gao et al. from the Univ of Illinois [in J. Synchrotron Rad, 2009]
Reporting work done at XOR-3 at the APS with support from the NRIXS project at UIUC and ANL

The Earth’s inner core is seismically anisotropic: compressional sound waves travel 3-4% faster along the spin axis than in the equatorial plane. The cause of the anisotropy has been generally attributed to referential alignment of iron crystals. The density of the inner core is smaller than pure iron under corresponding pressure and temperature conditions, presumably due to the presence of lighter elements such as H, C, O, Si or S. In this study, we measured the compressional and shear wave velocities of Fe3C using nuclear resonant inelastic X-ray scattering in conjunction with X-ray diffraction experiments. Our results indicate that compared to pure iron, Fe3C provides a better match of compressional and shear... read more

D. Bower et al, from the Seismological Laboratory, California Institute of Technology
[in GRL, 2009]
Related to experimental work done at XOR-3 at the APS

Using a numerical model we include the intrinsic density change that occurs from high to low-spin ferropericlase around 50 GPa [ Sturhahn et. al., 2005 ]. This generates buoyancy similar to a discrete phase change. However, in pressure-temperature space the spin transition occurs over an extended pressure range for warmer material (Figure 1). The temperature broadening effect distributes spin- buoyancy over a large pressure range for warm plumes a nd a tight pressure range for cold slabs. In the deep mantle, spin-buoyancy works with therma l buoyancy and convection is enhanced for both upwellings and downwellings. In the shallow lowe r mantle spin-buoyancy m ildly hinders convection.

Although the additional buoyancy does not... read more

S.-H. Dan Shim et al. from the Massachusetts Institute of Technology and co-authors
[in PNAS, 2009]
Reporting work done at XOR-3 at the APS with support from the NRIXS project at UIUC and ANL, and the GSECARS beamline at Sector 13.

Discovery of a new partially ionic phase of boron

The Spin Deep Within the Earth

Softening of Bulk Modulus during Phase Transitions in the Earth's Mantle

How Large is Activation Volume for Olivine?