COMPRES Mission Statement: The mission of COMPRES, on behalf of its community of member institutions, is to enable Earth Science researchers to conduct the next generation of high-pressure science on world-class equipment and facilities, to facilitate the operation of beamlines and use of high-pressure Earth sciences facilities at national laboratories, to develop new technologies for high-pressure research, and to advocate for science and educational programs.

The Consortium for Materials Properties Research in Earth Sciences (COMPRES) was formed, in part, as a response to new scientific and technological opportunities and developments, and a new style of conducting high-pressure science.  Starting with a Town Meeting at the Fall 2000 AGU Meeting in San Francisco organized by the AGU Mineral and Rock Physics Committee, the planning process began in earnest with a workshop at the Scripps Institution of Oceanography in La Jolla in February 2001 and culminated into a successful proposal to the NSF Division of Earth Sciences in August 2001.  In May 2002, a Cooperative Agreement was promulgated which projected funding for COMPRES for a five-year period to April 2007.This cooperative agreement was renewed in April, 2007 for another five-year period to May, 2012. 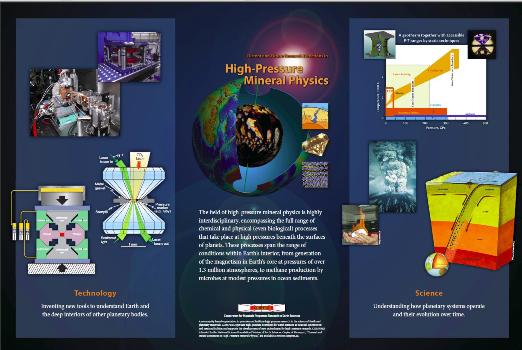 COMPRES is a community-based consortium that supports research in the materials properties of earth and planetary interiors with particular emphasis on high-pressure science and technology and related fields. The Consortium currently has 66 members that are educational or governmental institutions in the U.S. with research and educational programs in the science of Earth materials.  There are also 48 foreign affiliate institutions.

COMPRES is charged with the oversight and guidance of important high-pressure laboratories at several national facilities, such as synchrotrons and neutron sources.  It facilitates the operation of beamlines, the development of new technologies for high-pressure research, and advocates for science and educational programs to the various U.S. funding agencies, including NSF, DOE, DOD and NASA.  The community-wide organization of mineral and rock physics introduced by COMPRES is directly analogous to the centralization of efforts in other geophysical sciences, such as the coordination of seismic data distribution and instrument deployment orchestrated by the Incorporated Research Institutions of Seismology (IRIS).

In addition to the operation of community facilities, COMPRES supports infrastructure projects to promote the development of new technologies for high-pressure research, for use in both laboratories in our home institutions and at the national laboratories.  Current examples of such infrastructure development projects include:  (1) Absolute pressure and temperature calibration; (2) Multi-anvil cell assembly development; (3) Brillouin spectrometer for the APS; (4) Nuclear resonant inelastic X-ray scattering at high pressure and temperature;  (5) New CO2 laser-heated diamond-anvil cell; (6) COMPRES environment for automated data analysis, a software development project; (7) Technical support for dual beam focused ion milling facility for TEM foil preparation; (8) Gas-loading system for diamond-anvil cells at the APS; (9) Development of next generation multi-anvil module for megabar research; (10) Calorimetry-on-a-chip; and (11) Monochromatic X-ray side station at the multi-anvil beamline of the NSLS.

While COMPRES derives its primary financial support from the Instrumentation and Facilities Program in the Division of Earth Sciences of the NSF, it leverages the enormous investment of the DOE in constructing and supporting the operation of its national laboratories, notably those at Brookhaven, Argonne, Lawrence Berkeley, and Oak Ridge National Laboratories.  In addition, members of the COMPRES community have been very successful in obtaining other funding from the NSF, DOE and DOD to enhance the opportunities for research in high-pressure mineral physics.

Under separate funding from the NSF Division of Earth Sciences, scientists in the COMPRES community are pursuing three Grand Challenge collaborative research programs:  Growth of large synthetic diamonds by chemical vapor deposition; Rheology of earth materials; Elasticity of earth materials—all at high pressures and temperatures.  While these Grand Challenge programs are formally independent from the COMPRES core grant, they are intimately related intellectually as they give prime examples of the scientific problems that can be addressed using the facilities operated and the technological developments funded by COMPRES.

Communication within the mineral physics community includes monthly letters from the President, quarterly newsletters, an active website [http://www.compres.us], and an Annual Meeting.  The 2009 COMPRES Annual Meeting at the Mount Washington Resort in Bretton Woods, New Hampshire attracted 109 active participants, including many young scientists [see photo on COMPRES Home Page];  this photo clearly demonstrates the vitality and diversity of the community of mineral physicists.  This meeting included focus sessions on the minerals and volatiles in the mantle, the core and planetary evolution, all of which included keynote talks by leaders in allied geoscience disciplines (seismology, geodynamics, geochemistry, planetary science) followed by group discussion, as well as reports from the Community Facilities and Infrastructure Development projects, breakout session on special topics and poster presentations highlighting the most exciting recent scientific achievements.